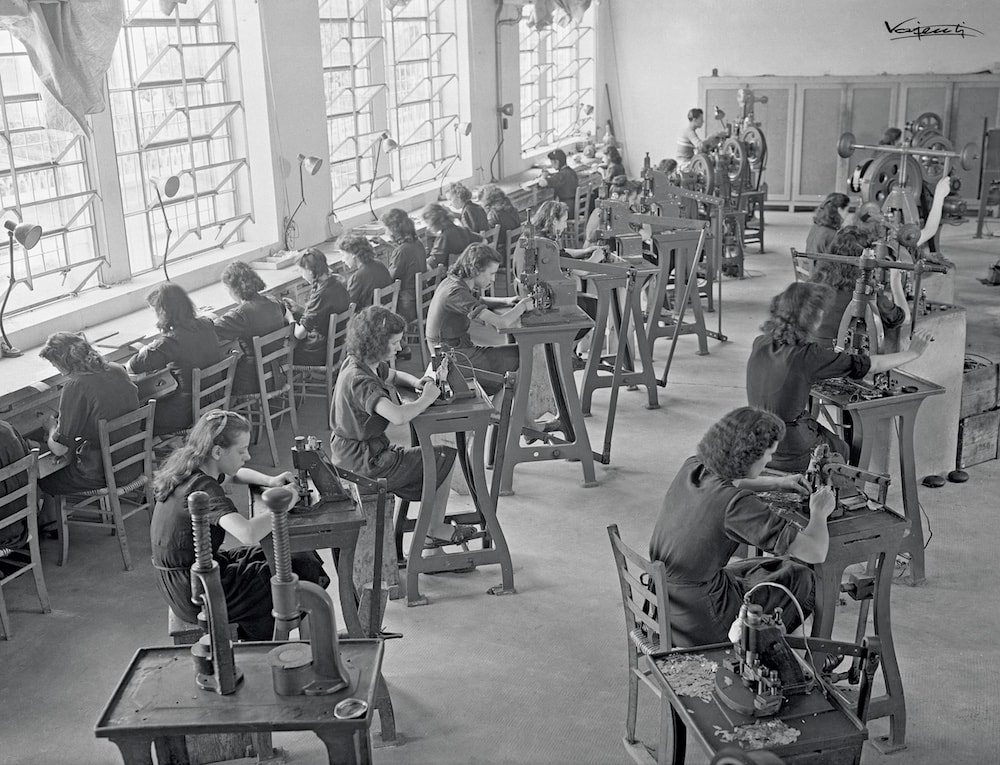 Umberto Cazzola, first of the Cazzola’s dynasty of jewellers, opened his first goldsmith’s workshop with about 20 employees back in 1929, eventually passing on his innovative, pioneering approach to his son Odino. 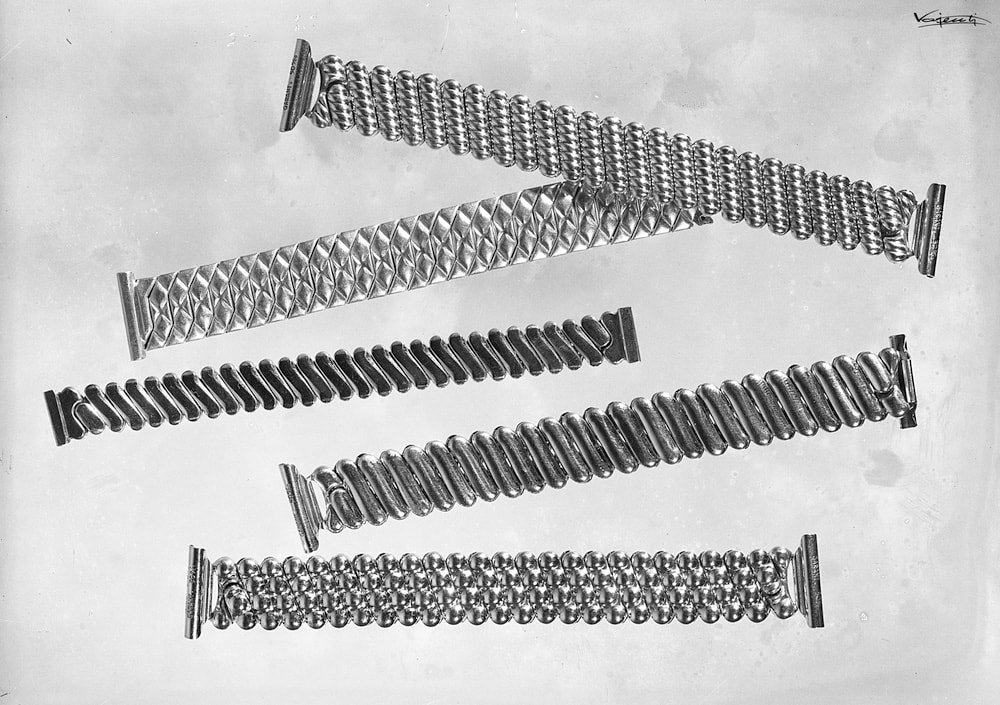 After the Second World War, the workshop turned into a cutting-edge factory thanks to the strong economic growth that involved the whole country. Odino invested in modern technologies that let him to develop revolutionary products, such as the flexible metal straps which will be the core of the production until the 1960s. In 1948 FOPE presented some works of the finest modern goldsmiths at Vicenza fair for the very first time. 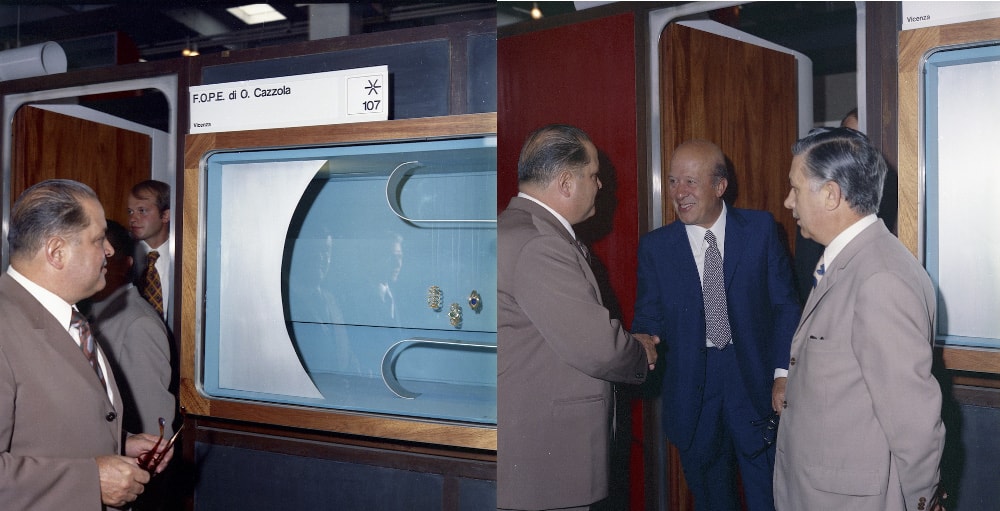 In Italy FICM, an acronym for Italian factory metal strap, was the first company to make these products, original both in manufacture and design. The leading Swiss watch makers demanded for very high standards and FOPE, thanks to craftsmanship and innovative technologies, became the leading supplier in Italy. At the end of the 1960s Odino changed the company name from FICM to FOPE which translates into Factory of Jewellery Precious Export. 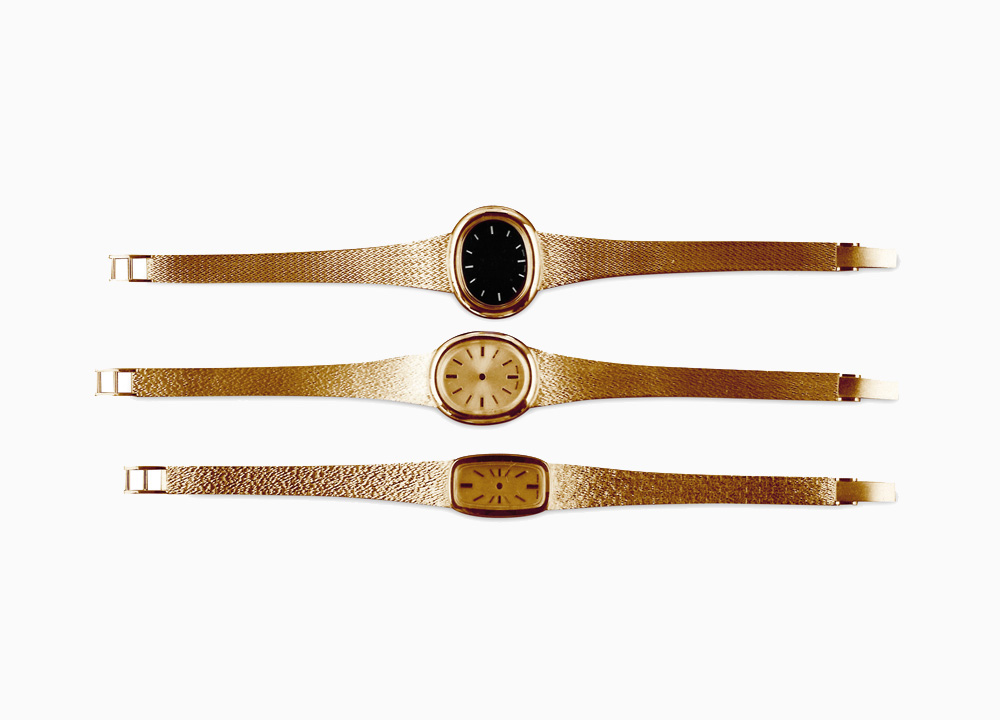 Umberto (named after his grandfather) and his sister Ines transformed the family business by investing extensively in research and development and perfecting cutting-edge technologies.  In these years FOPE specialised in making watch-straps and watch-cases from gold and began to experiment new techniques to create exquisite jewellery. 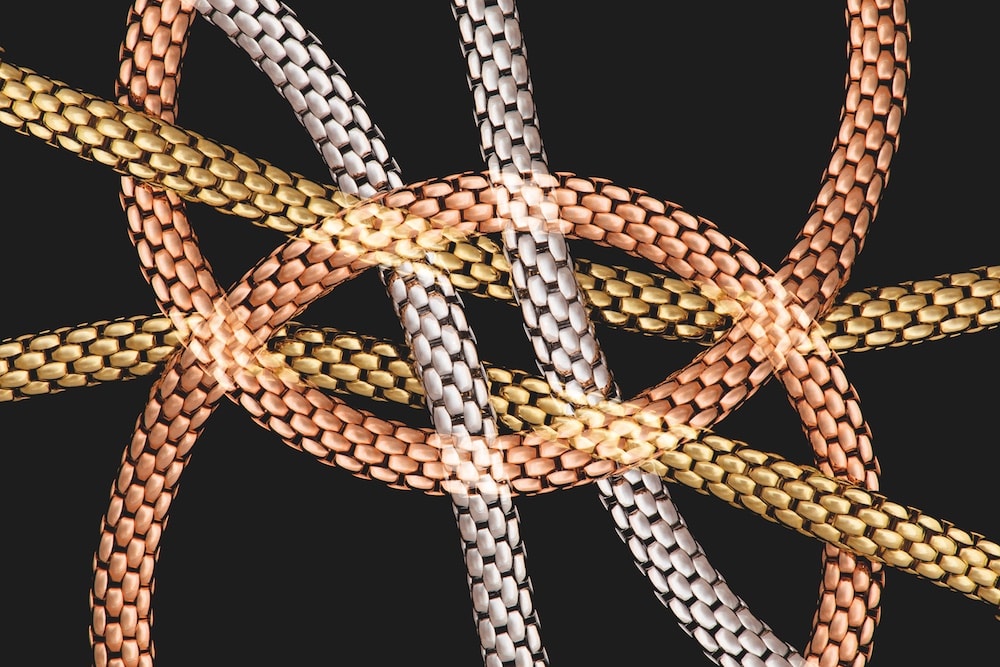 When the third generation joined the family firm, FOPE poured its vast wealth of expertise into making its own gold jewellery collections. In 1985 it created the Novecento mesh, today the true brand’s icon, shaping it into many different designs: the brand’s signature style brought it success in Italy and, later, world-wide. 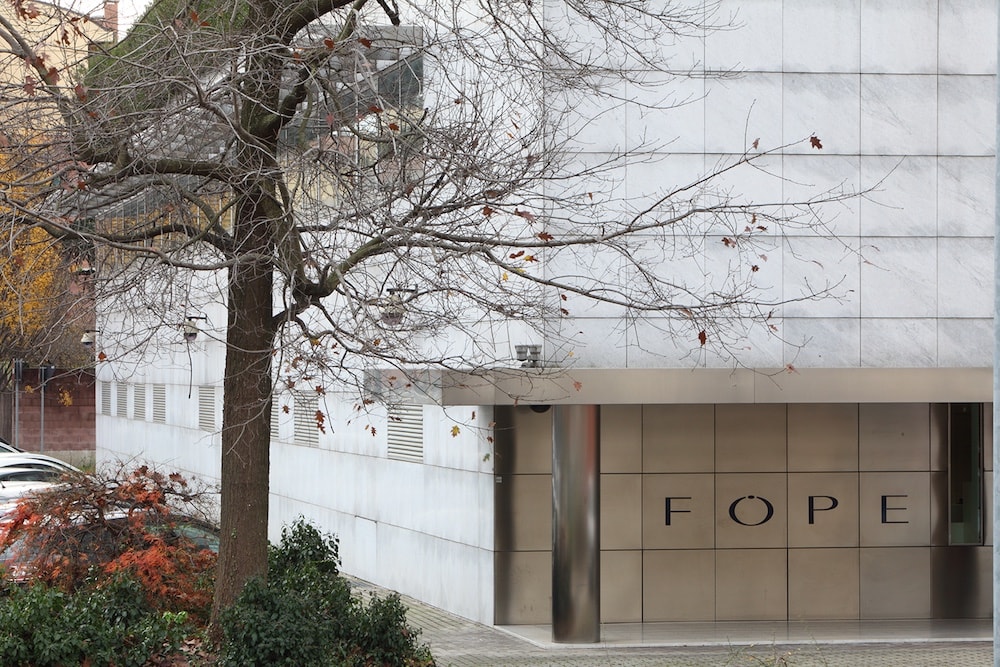 FOPE inaugurated its new headquarters in the center of Vicenza: it is a modern building designed to accommodate the premises and the production. This is the place where the company continues to blend craftsmanship and state of the art technology, while securing leading distinctive jewellery collections.
In these years the fourth generation joined the family firm: Giulia, Umberto’s late daughter, who passed away at the beginning of 2019, opened the American branch in New York. Later she started to managed the brand’s marketing strategies and became part of the company’s board playing a fundamental role in launching FOPE worldwide. 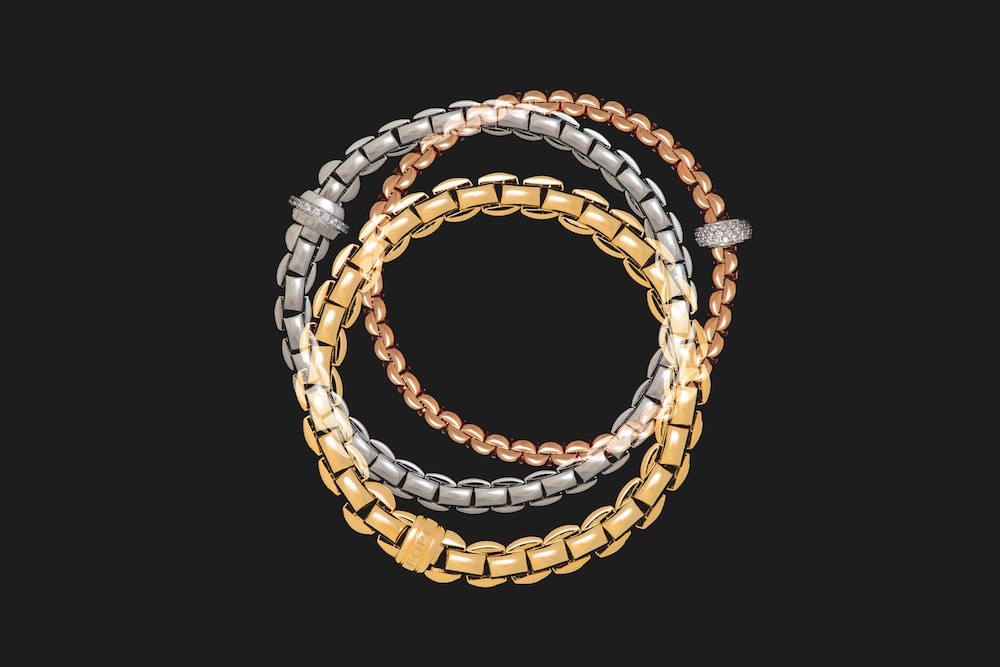 The Flex’it lines feature stretchable bracelets and rings crafted solely in 18 carat gold and rendered fully flexible thanks to tiny gold springs hidden between each link.
FOPE invented this ground-breaking system a few decades ago, then patented it and applied it to its signature gold mesh chain in 2007. Since day one, Eka has represented a true revolution in the way women wear their jewellery, with the original roll-on mesh chain becoming a new must-have to keep on the wrist around the clock.

FOPE has been a Responsible Jewellery Council member since 2013 and became a certified member in 2014.
The RCJ certification (renewed in autumn 2017 after a second audit) provides further guarantee of the quality of the FOPE jewellery and the ethics of the production process.
The Responsible Jewellery Council is an international not-for-profit standards and certification organization with more than 500 member companies that span the jewellery supply chain from mine to retail. 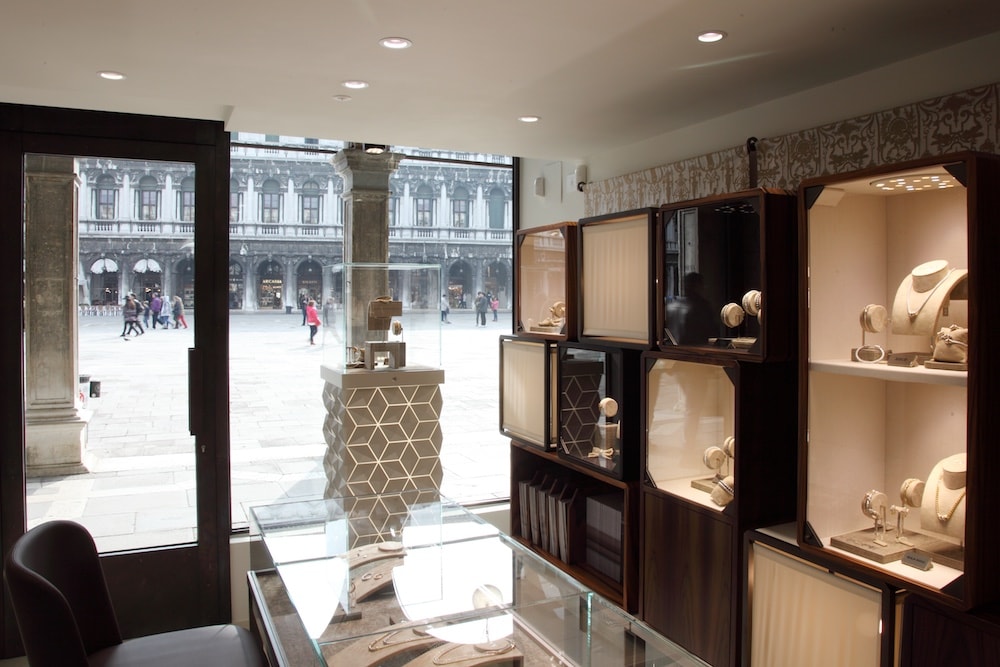 2015 was a very special year to FOPE who has enjoyed the success of the Venice flagship store which has exceeded any expectation.
The new jewellery store is located under the ancient arcades of the Procuratie Vecchie and has two large windows overlooking the beautiful San Marco square. FOPE worked side by side with architect/designer/art director Flavio Albanese and ASASTUDIO to completely re-design and respectfully refit the existing premises and inserted a few contemporary touches.
The outcome is a sophisticated environment consisting of two cosy rooms with wooden niches, Venetian fabrics and the brand’s signature pattern on the wallpapers, all of which is delicately lit by custom-designed lanterns. The perfect ambiance for a full FOPE shopping experience.

It was November 30th 2016 when FOPE rang the bell at the Milan Stock Exchange. The company launched a public offering on AIM Italia, Borsa Italiana’s international market for smaller growing companies. A project that quoting FOPE C.E.O.  Diego Nardin “is an important step in the company growth. First of all as it represents a formal recognition of our efforts and achievements, then as it is starting point towards our new ambitious goals as an international luxury brand." 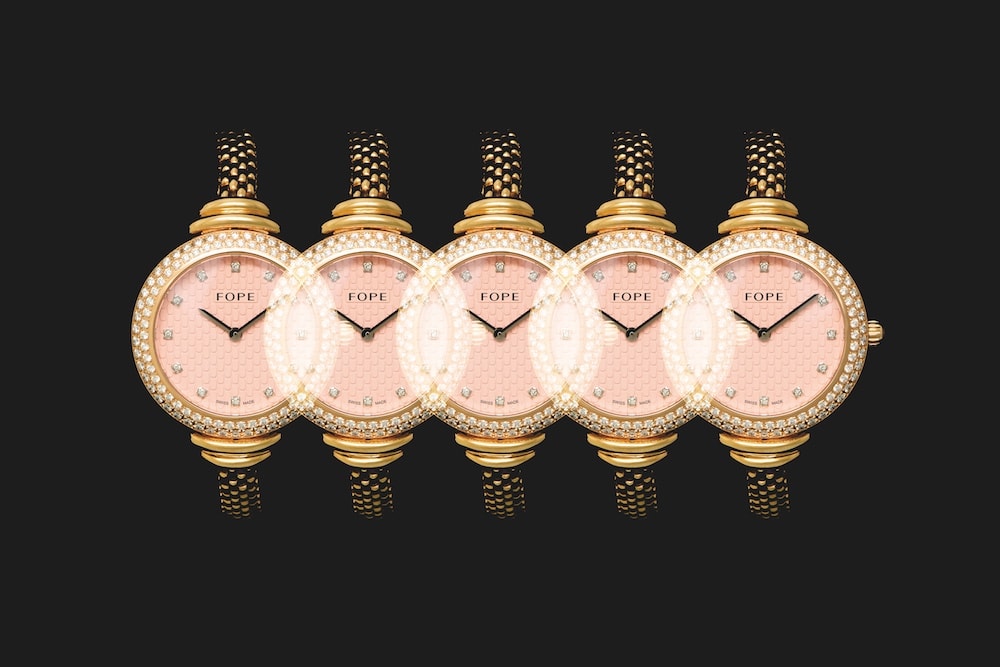 Ten years after the launch of the first Flex'it collection, FOPE proudly celebrated its success by creating LadyFope, a line of 18 carat rose or white gold watches which combines elegance and innovation. A Swiss-made watch with quartz movement and a Flex’it bracelet come together resulting in unique timepieces - each carrying an individual identification number.

Inspired by its provenance and by the values that have always steered the company strategies, in 2019 FOPE presents a huge restyling project who will involve a new logo, new colours, communications tools and all things brand identity. These new elements mark the 90th anniversary of the foundation, a fantastic achievement for a company that has always been owned by the same family and has grown dramatically in time thanks to leading distinctive jewellery collections.  In addition FOPE presents a new brand collection called Eka Anniversario, a new version of the signature bestsellers range consisting in a subtle yet fundamental re-design of the rondel, a true joy for those seeking for Italian elegance, comfort, high quality and wearability. New upcoming novelties are in the pipeline. 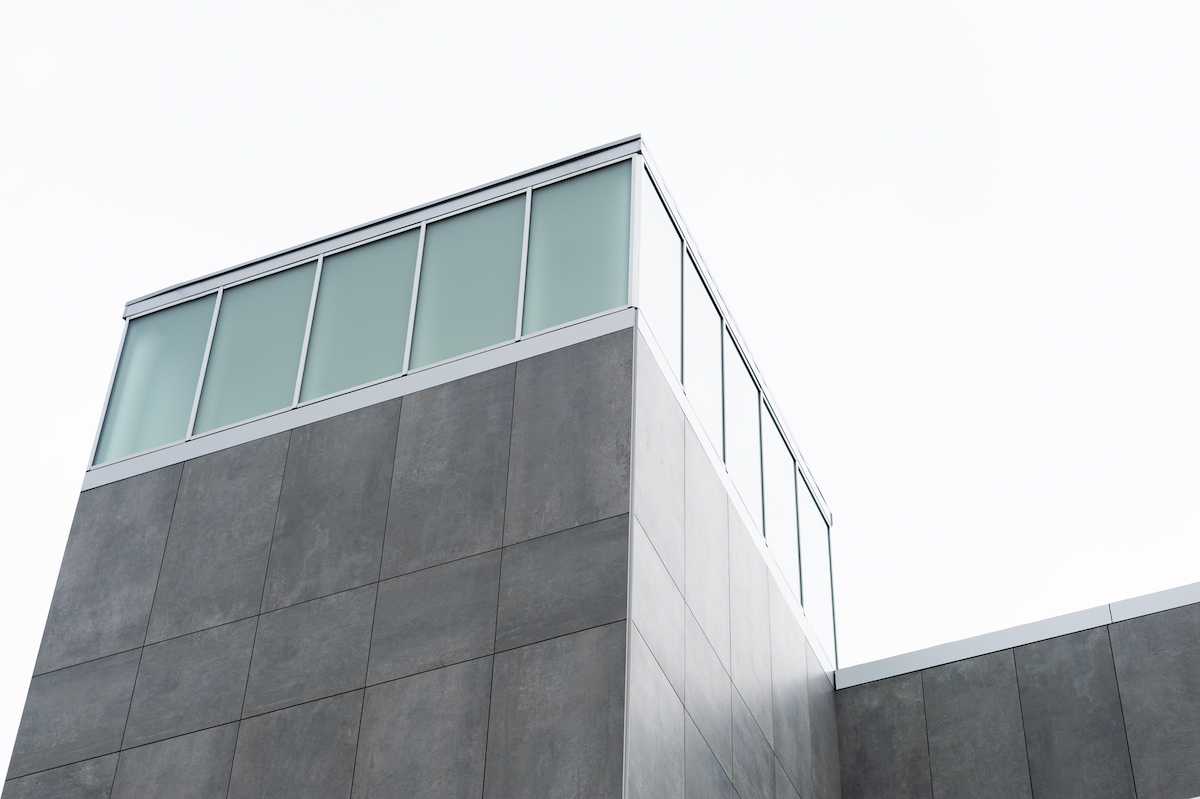